The HKU Class of 1971 initiated a fundraising project at the time of their 40th anniversary to donate a work of art to HKU in celebration of the University’s Centenary in 2011.

Through a long and extensive selection process by the University’s Working Group on Art and Decoration, and with the help from the Hong Kong Arts Centre, local artist Mr Danny Lee’s work named “Universe 萬象” was chosen. It is now installed on the lawn outside the Fitness Centre at the Centennial Campus.

Silver Jubilee Class Giving Tradition
The Class of 1971 is a class of pioneers. Not only did they initiate this creative project for their 40th anniversary, they also started the unique Silver Jubilee reunion and giving tradition 20 years ago. Since that time their support of HKU has never stopped and now, at their 45th anniversary, they are still tirelessly thinking of new ideas to contribute to their alma mater and are planning ahead for their Golden Jubilee reunion in 2021. 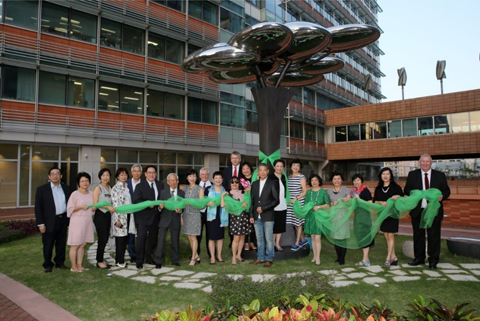 “Universe 萬象” was unveiled on October 27, 2016 by the Class of 1971, together with President Peter Mathieson and Executive Vice-President Steve Canon.